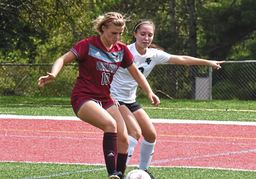 By the end of last year's record-breaking soccer season, the OC Eagles were both section and WPIAL champs. They celebrated the way strong athletes do: they doubled their efforts over the summer and came back intent on repeat success.

This fall, the team has more than lived up to their titles, already claiming another section victory. While the OC community has encouraged and supported them throughout their impressive run, another notable organization has recently highlighted their outstanding achievements by honoring OC player Hannah Henn. Last Friday, the Post-Gazette named Hannah 'Athlete of the Week,' commending her invaluable contributions to the Eagles' most crucial wins this year (and last) as well as her strong GPA and dedication to her team.

Already committed to Michigan State after graduation, Hannah shows no sign of letting up in her last two years at OC! Read the full Post-Gazette interview here.