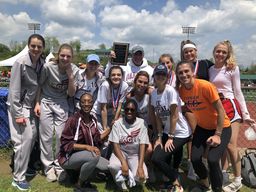 This past week, Oakland Catholic's long-time, much-beloved track and cross country coach, George Rudolph, was honored with the Tri-State Coaches Lifetime Achievement Award. Appropriately presented during WPIAL Championships at Slippery Rock University where yet another group of mentees proudly represented OC, the award recognizes George's "outstanding contributions and years of continued service to the students and athletes of Oakland Catholic High School and the tri-state area."

George began his career at Sacred Heart High School in 1973 where he coached for 16 years before continuing at Oakland Catholic for the next 40. During this tenure, he mentored more than 2,000 athletes. Of these, more than 40 continued their running careers in college with over 24 participating in Division I track or cross country. Under George's tutelage, runners have earned titles at sectional, WPIAL, PIAA and national competitions. This year alone, OC's track and field team celebrated the end of their season as undefeated section champions and first place-winners of both the Tri-State Track Coaches' and South Fayette Invitationals.

Congratulations, George! We owe you a debt of gratitude for your endless dedication and support.