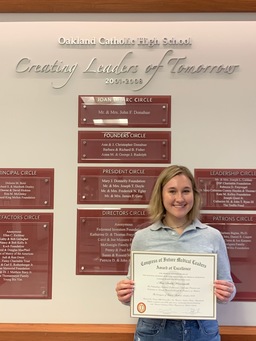 Dalila Weismantle is the recipient of the Award of Excellence certifying her successful completion of the Congress of Future Medical Leaders. Dalila, a junior at Oakland Catholic High School, represented the school and the Commonwealth of Pennsylvania at the Congress in Boston, Massachusetts this past June.

The Congress of Future Medical Leaders is an academic honors program, during which Dalila was personally taught by prestigious medical professionals, including several Nobel Prize winners. She watched a live partial knee replacement surgery and had a chance to question the surgeon in real-time.

"For three days, from 8:00 a.m. until 11:00 p.m., I was learning about medical experiments, the intricate chemistry used, and clinical rotation experiences. There was such a wide variety of speakers, and it was very interactive. We were encouraged to ask questions and had specific times in our schedules when we could talk with the doctors one-on-one," said Dalila.

Students are selected to become delegates by their teachers, counselors, and principals, and must have a 3.5 or above GPA. Dalila learned about the Congress when she attended the Perry Initiative program in April. It was held at Carnegie Mellon University and is designed for women who are interested in engineering and orthopedic surgery. "It was then that I decided I definitely want to be a doctor," added Dalila.